There’s no question that life can be stressful at times. Or maybe most times. It’s easy to feel overwhelmed between work, family obligations, and other responsibilities.

However, there are many ways we can reduce that stress and overwhelm naturally. And it starts with increasing your GABA levels.

In this blog post, we go over what GABA is, the benefits you gain by having high levels of GABA, ways to increase GABA levels naturally, foods that help boost GABA levels, and the best natural nootropic supplements that raise GABA levels.

So let’s get going!

Gamma-aminobutyric acid, or GABA, is one of the most essential neurotransmitters in the brain. It is responsible for maintaining communication between neurons and has many benefits for overall mental health and wellbeing.

As a neurotransmitter, GABA plays a vital role in regulating communication between the brain and the nervous system.

GABA levels are low in people with anxiety and depression, and it is widely used today as a supplement to assist the treatment of these conditions.

Research has also shown that GABA help improve cognitive function and memory. In addition, it’s known to have anti-inflammatory and neuroprotective properties. Which means that it can help protect the brain against damage from stress and aging.

As a result, GABA is often included in nootropic stacks or used as a standalone supplement to support cognitive health.

Some of the key benefits of having high levels of GABA include:

Now that we know all of the great benefits GABA offers, let’s look at some of the best ways to naturally increase GABA levels, and the benefits of having high levels of GABA in general.

Benefits of Having High Levels of GABA

Your brain is always working, even when you are not thinking about anything.

It’s constantly sending and receiving signals, managing your thoughts and feelings, and controlling your body. And all of that work takes energy and lots of it.

Your brain needs a lot of energy to function at its best, so it’s essential to eat healthy foods and get plenty of rest. But sometimes, even with a good diet and enough sleep, your brain might not be performing as well as it could or should be.

One reason for this might be low levels of GABA.

As we mentioned, GABA is a neurotransmitter that helps your brain cells communicate with each other. It’s also responsible for regulating your body’s stress response.

Low levels of GABA have been linked to anxiety, depression, and poor sleep quality. Luckily, there are several natural ways to increase your GABA levels.

Exercise has been shown to increase levels of GABA in the brain. In one study, participants who exercised for 30 minutes three times per week had significantly higher levels of GABA than those who didn’t exercise.

Sleep is essential for overall health and wellbeing, and it also plays a role in GABA levels. In one study, participants who slept for eight hours had higher levels of GABA than those who slept for only four hours.

Stress can hurt GABA levels. In one study, participants who underwent a stress reduction program had increased levels of GABA.

Eating a healthy diet is vital for overall health, and it may also help increase GABA levels. In one study, participants who ate a healthy diet had higher levels of GABA than those who didn’t eat a healthy diet.

Many different types of supplements claim to increase GABA levels. However, it’s essential to speak with a doctor before taking any supplements. They may interact with other medications or have side effects.

If you’re looking for a way to boost your brainpower, nootropics like GABA may be worth considering. Talk to a doctor before taking it.

GABA is essential for the proper functioning of the nervous system. It is produced in the brain and helps to regulate mood, reduce anxiety, and promote relaxation.
Stress can cause GABA levels to drop.

Almonds are also high in omega-3 fatty acids and contain magnesium. This mineral has been shown to promote GABA production.

Spinach is rich in folate, a nutrient that helps maintain healthy GABA levels.

Salmon is another excellent source of omega-3 fatty acids and contains vitamin B6. This nutrient is essential for GABA production.

Eggs are a good source of choline, a nutrient that helps to support brain health. Choline has also been shown to increase GABA levels.

Several natural nootropic supplements can help to increase GABA levels in the brain. Some of these supplements include:

Each of these supplements is effective in raising GABA levels in the brain.

L-Theanine is an amino acid that is found in green tea. It has been shown to increase GABA levels in the brain and have a calming effect on the body.

Valerian Root is a herb that has been used for centuries to treat anxiety and insomnia. It works by increasing GABA levels in the brain and has a calming effect on the nervous system.

Kava Kava is a nootropic supplement that effectively raises GABA levels in the brain. It is also known to have a calming effect on the body and mind.

Passion Flower is a herb that has been used to treat anxiety and insomnia. It works by increasing GABA levels in the brain and has a calming effect on the nervous system.

Each of these supplements is effective in raising GABA levels in the brain.

If you are looking for a natural way to increase GABA levels, these nootropic supplements may be a good option for you.

Many different nootropic supplements help, but some are far more effective than others at increasing GABA levels. Here is a look at five of the best nootropics for boosting GABA levels and improving mental function:

Alpha GPC is a nootropic supplement that has been shown to increase levels of GABA in the brain. It is thought to work by increasing the amount of acetylcholine available and increasing GABA levels.

Caffeine is a nootropic that can increase levels of GABA in the brain. It works by blocking the action of adenosine, which is a compound that inhibits the release of GABA.

L-Theanine is an amino acid found in green tea. It is thought to increase levels of GABA by inhibiting the reuptake of GABA by neurons.

Bacopa monnieri is a herb that has been shown to increase levels of GABA in the brain. It is thought to work by increasing the synthesis of GABA. Additionally, Bacopa offers a great variety of benefits. You can learn about the 5 top benefits of bacopa monnieri here.

Ginseng is an herbal nootropic that has been shown to increase levels of GABA in the brain. It is thought to work by stimulating the release of GABA from neurons.

These are just a few of the best nootropics for increasing GABA levels and improving mental function. If you want to experience the benefits of nootropics, try one or more of these supplements.

This content is for informational purposes only and does not constitute medical advice.

Always consult a doctor before taking any nootropic supplement, especially if you have a medical condition or are taking other medications.

Nootropics are a great way to increase GABA levels and help improve cognitive function. If you’re looking for an all-natural way to boost your GABA levels, consider adding nootropics like the ones we’ve listed above to your diet or supplementation routine.

You might also want to consider adding other all-natural nootropics to your routine, like Rhodiola rosea & Ashwagandha.

GABA (gamma-aminobutyric acid) is a neurotransmitter that helps regulate nerve activity in the brain. It plays a role in calming the nervous system and promoting relaxation.

What are the benefits of boosting GABA levels?

There are many potential benefits of boosting GABA levels, including reduced anxiety, improved sleep, and decreased stress.

What are the best ways to increase GABA levels?

There are a few different ways to increase GABA levels, including supplementation, diet, and lifestyle changes.

What are the side effects of taking GABA supplements?

Most people tolerate GABA supplements well. However, some may experience side effects such as headaches, dizziness, or nausea.

Is it safe to take GABA supplements?

Generally, yes. However, if you have any medical conditions or are taking any medications, please speak with your healthcare provider before taking GABA supplements. 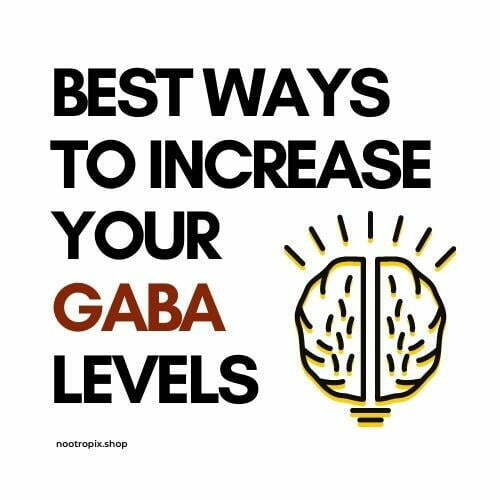